How do you prove love? For the Whopper’s 50th birthday, we convinced Burger King to take the Whopper, America’s most beloved burger, off the menu for one day, in one city. Would people miss the Whopper? Would they care? As it turned out, people freaked out.  In the weeks that followed, Whopper sales leapt 18% and the campaign eventually won the Grand Effie.

What would you rather have, a bunch of Facebook “friends” who you don’t even know, or a free Whopper? Facebook “liked” this idea so much they changed their terms and conditions to prevent something like this from ever happening again.

Sure, lots of NASCAR racers say they love their fans, but it took Tony Stewart and BK to demonstrate that support in an tangible way. Fans were encouraged to sign their names on our site, then those thousands of signatures were turned into the Burger King logo on the hood of Tony’s car as he raced in the Daytona 500.

In the fairest, most impartial taste test of all time, we went around the world to find people who had never tasted a burger, never watched a burger commercial, or even had the word “burger” in their language. Which would they prefer: the Whopper or the Big Mac?

Celebrity endorsements are typically very suspicious. Do they really enjoy the product they are pitching, or are they just doing it for the money? To prove that NASCAR champion Tony Stewart really did love the Whopper, we hooked him up to a polygraph machine, live as thousands of people watched Tony sweat.

The King and Brooke Burke

Love him or hate him, the Burger King got people’s attention. And never more so than when we paired him up with celebrity hottie Brooke Burke in a love relationship that saw the duo attend a Lakers’ game, ride horses on the beach in Malibu and do all the things that famous couples do. Including break up after, like, a couple of weeks. 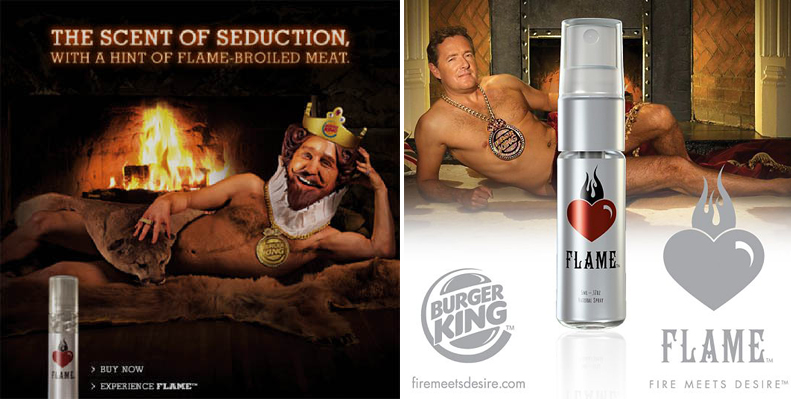 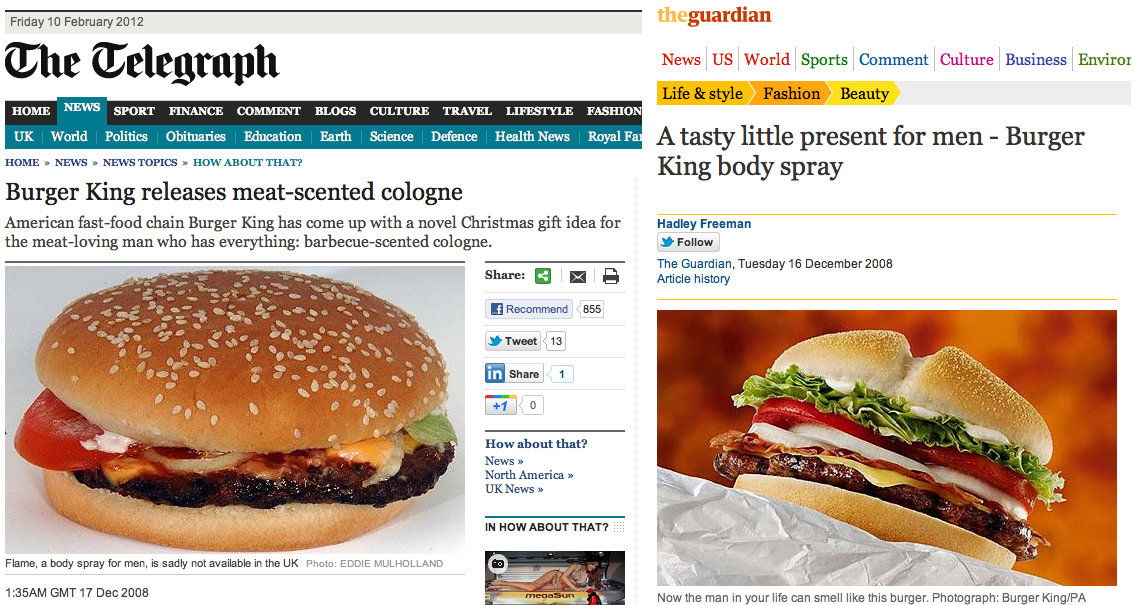 To generate buzz during the holiday season, a time when fast food sales traditionally decline, we invented a new kind of stocking stuffer. Introducing Flame. The new cologne with the scent of passion. And a hint of flame-grilled beef.

Don’t go to bed before the King – Cymbal

Don’t go to bed before the King – Shaving foam